Foundation of Jyotiṣa I: Guṇas

In the beginning there was the great Void. The five primordial elements or the pañca bhūtas, the fourteen lokas or the caturdaśa bhuvanas, the Universe, dyu and Space, water and air, sound, and light nothing existed. There was neither death nor life, no day nor night, neither beginning nor end. There existed only the one Brahmaṇ, immersed in the mire of dark ignorance and undivided from its Māyā, formless and without any attributes or qualities. Then Parameśvara Brahma desired to create, and upon this desire, creation took place and the Universe unfolded.1 The Supreme Being appeared with qualities and attributes; its creative energy latent within was stirred and activated, and manifested itself, to eventually give birth to this splendorous world.

Śakti and the Emergence of the Guṇas

This creative impulse is called śakti, and the first attributes or qualities to manifest, are known as the Guṇas. It is an impulse inherent within the Brahmaṇ or the Divine Absolute, which activates the process of creation, sustains the universe, and then subsequently destroys it. It is not only the primordial energy but also the material matrix itself in which the manifest world is grounded and, in that sense, śakti is at once latent and manifest, both static and kinetic. It is the manifestation of the unmanifest, great void of the nirguṇa Brahmaṇ as the five gross elements of ether, air, fire, water and earth, the triptychs of heat, water, food; red, white and black; the sattva, rajas and tāmas; the sixteen vikāras and the twenty-four tattvas. Śakti is speech as śabda brahmaṇ, the masculine as puruṣa and the all-pervading Omnipresence as cit or consciousness.

The first qualities or attributes of the Brahmaṇ that is discernible the moment the latent śakti is activated are the three guṇas: sattva, rajas and tāmas. The guṇas are in equilibrium before creation, lying dormant in the Primordial Nature, but as the Parameśvara desires to create, this desire itself activates the tamo guṇa, and this brings alive the latent guṇas and manifests them. Rajo guṇa is stimulated and it is this rajas that creates the material world. Finally, sattva guṇa is animated to sustain the created universe. These three guṇas constitute Prakṛti from which the twenty-four tattvas evolved.

Parāśara inaugurates his monumental work the Bṛhat Parāśara Horā Śāstra with the description of this unmanifest and manifest aspect of the Brahman (see śloka on top of page 1). He writes that the One, unmanifest Ātmā, who does not have a beginning or end, the God of all beings, the Lord of the Universe, Viṣṇu, is both without the guṇas as well as endowed with them. He then proceeds to give a beautiful depiction of this process in the first chapter of the Bṛhat Parāśara which is devoted to the theory of Creation, thereby indicating the significance of the knowledge of scriptural and philosophical principles prior to the study of horā śāstra. 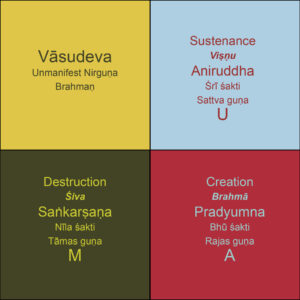 The unmanifest Brahmaṇ is Vāsudeva and as his creative impulse, his śakti assumes three hues according to the guṇas associated with them. It is as if each śakti activates a particular guṇa and then riding it is manifested.  The three śaktis are Śrī Śakti, Bhū Śakti and Nīla Śakti and they respectively activate the sattva, rajas and tamo guṇas.  Vāsudeva is therefore saguṇa now and his three aṅśas which are replete with the guṇas and the śakti are known as Aniruddha, Pradyumna and Saṅkarṣaṇa.  Parāśara has visualized this process as a quadrant, probably a precursor to his later thoughts on the kendras, or probably to the scriptural reference of Narayana as connected with all that is associated with the number four. Of the quadrant, one quarter is Vāsudeva as the unmanifest Absolute Brahmaṇ, while the other three quarters are his manifest, saguṇa selves as Aniruddha, Pradyumna and Saìkarṣaṇa2. Brahmā, Viṣṇu and Śiva are the ahaṇkāra mūrtis of the three guṇas. United with Śrī śakti he is Viṣṇu and sustains the universe, with Bhū śakti he is Brahmā and creates the material world and with Nīla śakti he is Śiva and destroys all creation at the time of pralaya.  Vāsudeva and his śaktis are also known as Puruṣa and Prakṛti, with Puruṣa representing the latent, eternal aspect and Prakṛti the changing and ever-evolving flux constantly manifesting herself in differing ways.

It is from the distortions or the vikāras of these guṇas that the twenty-four tattvas which include the Mahat, Buddhi, Ahaṇkāra, the Pañca Tanmātrās, the Pañca Mahābhūtas, the Daśa Indriyas and the Mana from which both the animate and inanimate worlds are created. This created; manifestation of the Supreme Being is Prakṛti.

The Grahas and the Guṇas

Jīva (Jupiter), Sūrya (Sun) and Indu (Moon) are sātvik planets, Budha (Mercury) and Śukra (Venus) are rājasik while Sūryaputra (Saturn) and Dharāputra (Mars) are the tāmasik planets.  The signs owned by these planets assume the guṇas of their lords. Cancer, Leo, Sagittarius and Pisces are the sātvik rāśis, Taurus, Gemini, Virgo and Libra are the rājasik rāśis and Aries, Scorpio, Capricorn and Aquarius are the tāmasik rāśis.

Brahma as the ahaṇkāra mūrti of rajas guṇa creates an animate and an inanimate world. The animate world is created by Venus while the inanimate world is created by Mercury. Venus gives life as it rules the bīja or semen from which the tree sprouts, while Mercury, the planet closest to the Sun, is ruled by pṛthvī tattva or the earth element. For the creation of non-living beings changes are required in the solid state which is brought about by Mercury. The destruction of creation is done by the two tāmasik planets, with Mars being the destroyer of the non-living world and Saturn being the significator of the one who brings about the destruction of the living world. Saturn therefore is also the significator of disease and when Saturn and Mars aspect or are associated with 3rd from AL, death becomes very painful. Sun, Moon and Jupiter as the three sātvik planets sustain the creation. The Sun sustains by being the supplier of all resources and making sure they are always available. The Moon creates the need or the demand for these resources while Jupiter enables the utilization of the resources, thereby ensuring that the demand and the supply are balanced.

The rājasik planets consume a high dose of energy as agni is required for creation, so when one speaks of renunciation, it implies the renunciation of rajas, so that the energy may be diverted towards tāpas. Every form of manifestation in this world is because of rajas, hence for a renunciate all manifestations must be shunned. The guṇa which dominates always is sattva guṇa and guṇas which prevail during pralaya is tāmas.

The Guṇas in the Bhāvas

In the bhāva cakra, the kendras are endowed with rajas guṇa as they represent creation; the paṇapharas sustain and hence represent sattva guṇa and the apoklimas signify destruction and represent tāmas guṇa.

Mercury and Venus should be strong in a kendra from AL for the native to enjoy rājasik activities or bhoga to its fullest capacity. Saturn and Mars in kendras are bad as they will obstruct all activities which will lead to success and achievement in the material world. Instead Saturn and Mars placed in the apoklimas are good as tāmas is strong in these bhāvas. Jupiter, Sun and Moon are well placed in the paṇapharas.

Parāśara writes that the predominant guṇa at birth should be identified in a horoscope and accordingly the professions and character of the person should be adjudged. When a person has a predominance of sattva guṇa he has perfect control over his senses and his mind, is truthful, just, patient and even tempered.

The native who is predominated by rajas guṇa will be valorous, splendorous, clever, protector of holy men and ever ready for war. He who is ruled by tāmas guṇa is greedy, lazy and a liar. Depending on the prevalent guṇa in a horoscope, the work and profession of the native should be determined.

The guṇas in a person undergo change and they in turn modify and alter the tattvas. These changes in guṇa are reflected in the daśās.  Hence dasas are nothing but the time periods which show how the guṇas are changing and affecting our mind. During daśās of sātvik planets, one might be attracted to or even engaged in sātvik activities and professions provide sattva guṇa is prevalent in the chart. Similarly daśās of rājasik and tāmasik planets may push a person towards such activities. The degree and intensity varies with respect to the predominant guṇa in the birth chart.