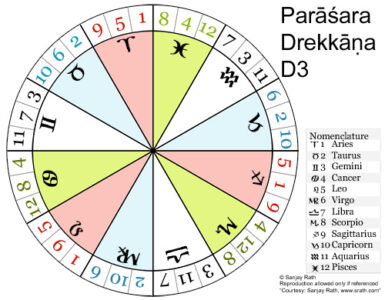 Methods of Construction
There are no fixed methods of calculating divisional charts. The standard method followed is that of Parāśara, a sequential counting procedure which may or may not be regular. The more uncommon method is that followed by modern researchers like Mantreśvara, where the zodiac is divided by multiples of twelve or by the number of the division.

Parāśara’s method of construction is both regular and irregular. The regular order is known as the order of Brahmā as it follows the perfect order of nature and is therefore synchronous. This order is applicable to those areas, which pertain to the living being, as it is the order of creation.  For example, Navāṁśa and Saptāṁśa are atypical Brahmā divisions. In Saptāṁśa, each sign is divided into seven parts. For odd signs, the counting begins from the same sign and for even signs it begins from its 7th sign. In the case of Navāṁśa, the signs are divided in to nine parts or the 108 padas of the 27 nakṣatras.  The counting begins from the same sign for odd signs, from the 9th for even signs and from the 5th for dual signs.

The irregular or ‘jumping’ movement is appropriate for those divisions, which pertain to the non-living world, the soulless, inanimate objects which men relentlessly pursue. For example, in Drekkāṇa, where the sign is divided into three parts, the first part is the sign itself, the second is the 5th form it and the third, the 9th from it. In Chaturthāṁśa, where a sign is divided in four parts, the counting is done from the sign, followed by the 4th, 7th and 10th signs from it. These therefore do not belong to the Brahmā division, which is the regular order of counting, as they do not relate to issues, which follow the natural rhythms of the universe.

A significant point to note is that many of the divisions have multiple methods of construction, like the Horā and the Drekkāṇa. Drekkāṇa may be constructed in four different ways, namely, the abovementioned Parāśarī method, the Parivṛttitraya Drekkāṇa, the Somnāth Drekkāṇa and the Jagannāth Drekkāṇa. The Somnāth and Parivṛttitraya Drekkāṇa follow a regular pattern of counting while the Jagannāth Drekkāṇa is a different form of the Parāśarī method. These different Drekkāṇas may be used for distinct purposes. Although the Drekkāṇa is to be seen for the co-born, it can also be seen for the self. In that case, the Parivṛttitraya Drekkāṇa would be suitable for inquiry of the self while the Parāśara Drekkāṇa would be more applicable while analysing relations with siblings. This is because each bhāva is kāraka for miscellaneous factors and if one wishes to fine-tune the divisional chart, then the appropriate method of construction will clarify the matter further.

Horā: Horā is the division of each sign in two halves or Horās, ruled alternatively by the Sun and the Moon. Based on the distance between the Sun and the earth, the zodiac is divided in half across 0°Leo and 0°Aquarius, into equal halves of light and darkness or solar and lunar halves. The solar half or Surya Horā is from Leo to Capricorn and the lunar half or the Chandra Horā is from Cancer to Aquarius in an anti-zodiacal direction. The Horā charts are constructed by assigning the first half of odd signs, 0°-15° to the lordship of the Sun and the second half, 16°-30°, to the rulership of the Moon. For even signs, the first half is the Chandra Horā and the second half is the Surya Horā. The Sun and Moon therefore own adjoining signs in their Horās. The Horā chart is used for seeing the wealth of the native.

Drekkāṇa: Drekkāṇa, otherwise known as the trine division, is the one third division of a sign. Hence there are 36 Drekkāṇas measuring 10 degrees each. The 1st Drekkāṇa is owned by the sign itself, the 2nd by the sign fifth from it and the 3rd by the sign 9th from it.  So for Aries lagna, the first three Drekkāṇas will be Aries, Leo and Sagittarius and the next three will be Taurus, Virgo and Capricorn. Drekkāṇa charts are seen for co-born and siblings as well as for the self.

Chaturthāṁśa:  This is the one fourth division of a sign, with each division measuring 7° 30´.  The first division is the sign itself, the second is the sign fourth from it, the third is the 7th sign and the fourth is the 10th sign. So for Aries lagna, the first four divisions will be Aries, Cancer, Libra and Capricorn. Chaturthāṁśa is useful for a variety of matters such as home, property, mother, happiness, vehicles and formal education. Alternatively this division is also known Turīyāṁśa.

Saptāṁśa: Each sign is divided into seven divisions of 4° 17´. The counting is sequential, starting from the sign itself for odd signs and from the 7th sign for even signs. For Aries lagna, the first seven divisions will be from Aries to Libra and the next seven from Scorpio to Taurus. The division is used for seeing progeny.

Navāṁśa: The most important division after the rāśi, Navāṁśa is the one ninth division of a sign. Each sign is divided into nine divisions of 3° 20´ each. The counting begins from the sign itself for movable signs, from the 9th sign for fixed signs and from the 5th sign for dual signs. So for Aries it will begin from Aries, for Taurus from Capricorn and for Gemini from Libra.  Navāṁśa is renowned for being the rāśi of the spouse but more importantly, it delineates the spiritual development of the native by identifying his path and objects of worship. Hence it is also known as Dharmāṁśa.

Daśāṁśa: Daśāṁśa or Swargāṁśa is the tenfold divisions of a sign, measuring 3° each. The counting begins from the same sign for odd signs and from the 9th sign for even signs. So for Aries it will begin with Aries and for Taurus it will commence with Capricorn. Daśāṁśa is an important division as it deals with the native’s work, career and profession.

Dvādaśāṁśa: This is the one twelfth division of a sign of 2°30´ each. For every sign, the counting begins with the sign itself and proceeds sequentially. So for Aries it will begin with Aries and end with Pisces and then begin again with Taurus for the next sign. Also known as Suryāṁśa, this division deals with parental lineage.

Ṣoḍaśāṁśa: Also known as Kālāṁśa, this is the one sixteenth division of a sign, measuring 1°52´30″. The counting begins from Aries for movable signs, from Leo for fixed signs and from Sagittarius for dual signs.  Kālāṁśa is used for seeing vehicles, luxuries and mental happiness.

Viṁśāṁśa: Viṁśāṁśa is the twentieth division of a sign, 1°30´ each. The counting is done from Aries for movable signs, from Sagittarius for fixed signs and from Leo for dual signs. Viṁśāṁśa is used to determine the spiritual inclinations and scope for occult studies of the native.

Khavedāṁśa: This is the 40th division of a sign measuring 45´ each. The counting begins from Aries for odd signs and from Libra for even signs. So for Aries it will begin with Aries and eventually end with Cancer, with the next sign commencing from Libra. Khavedāṁśa shows inherited karma through matrilineal lineage.

Akṣavedāṁśa:  This is the 45th division of a sign with each part measuring 40´. The counting begins from Aries for movable signs, from Leo for fixed signs and from Sagittarius for dual signs. Aries will therefore begin with Aries and ultimately end with Sagittarius and then Taurus will begin with Leo ending up with Aries and Gemini will start with Sagittarius. This division shows inherited karma through patrilineal legacy.

Ṣaṣṭiāṁśa: Ṣaṣṭiāṁśa digresses from the above methods by calculating according to the degree positions of the planets. The degree of a planet is multiplied by 2 and then divided by 12. The remainder is the sign from which the counting for Ṣaṣṭiāṁśa will begin.  Ṣaṣṭiāṁśa is the division, which shows past karma and the cause of re-birth in this life. In that sense, Ṣaṣṭiāṁśa is the rāśi chart of the immediate past birth and is the key to understanding the karmic implications of the present birth. It is in fact, the key to understanding divisional charts and is perhaps the most important division of all.